Electromagnetism is part of the Fundamental Forces series of paintings.  It is represented here by Sutro Tower in San Francisco.

This is an oil painting on wood panel and was completed in 2014.

The following three paintings are studies for Electromagnetism 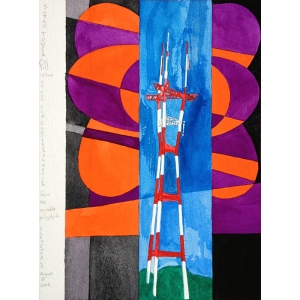 I am a native of California, returning to reside here in 1999 after careers in the military, theater, historic building restoration and writing. I have been dedicated to painting since 1992. In over 20 years I have taught myself to paint by studying great works from around the world that exemplify the styles and techniques of every age, by reading artists' first-hand accounts of their own experience and processes and by going to the easel each day to develop the discipline and confidence of a master painter. I would like to experience a revival of great painting and the resurgence of an audience able to appreciate such art. My technique of transparent layering and complex color mixing produces visual richness and depth. My process is informed by the dialogue between color as projected light and color as reflected light. I am an artist of this century who is informed by the legacy and immersed in futurism. My biography is not simple nor straightforward. Thomas Wolf is a native Californian who has been an artist for 21 years, leaving a scenographer's life in New York in the early 90's to travel to Seattle where, regarding the first public showing of his art in 1994 The Stranger wrote, " . . . the show is a must-see. Nowhere else are you going to experience the wonder, play and reticence of the cutting edge of cyberart." Wolf founded the Projectorheads light-show which headlined at the ReBar and provided highly charged visuals in Seattle music and art venues. From Hood River, Oregon his website "pointsource" won an award for creative design, and in Portland he had shows at the Mark Woolley Gallery, the Omni and the Yellow Bird Gallery.  He was an original contributor of work to Art on Alberta, the forerunner to the highly regarded Portland Open Studios project.  A painting of his is in the collection of the Hallie Brown Ford Museum of Art, and his painting "dada minefield” was used as a cover for the environmental Art magazine, “ORLO”. In the San Francisco Bay Area, Thomas Wolf has shown art in Emeryville, Oakland and San Francisco. Since moving to the San Francisco Bay Area in 1999, his work has been shown in diverse venues such as Google's headquarters, One Embarcadero Center, Hotel d'Art and the Blue Cube. His work was accepted to the Propaganda 1.0 and 2.0 shows in Los Angeles and into the fourth publication of "Bagazine" by the X-Ray Book Company. He continues to seek to innovate as an artist and to gain wider acceptance of the importance of persistence, discipline and process in the pursuit of painting as Art. View all posts by Thomas Wolf